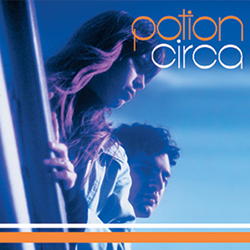 Cool as Steve McQueen and classy as The Avengers; Potion presents the sounds of the past as heard through a musical kaleidoscope from the future. The music uses an eclectic mixture of rhythms and samples as its sonic base. Melodious keyboard riffs and guitar layers support the hypnotic pop vocals creating imaginary and symbolic worlds outside of time and space.

On their 4-song Circa EP, San Francisco duo Potion come at you with a wave of pure style. The title track swirls together a Stereolab-ish bounce, crisp acoustic guitar and Anne Maley’s sultry pop vocals, plus whispering French voices in the background. All of the songs have a fresh, upbeat sound, somewhat retro in tone but full of life. Yet Potion aren’t all about flair and sonic fashion; their songs have memorable melodies and heartfelt lyrics that tackle love and loneliness. Their style will catch your attention first, but underneath it lies solid songwriting and genuine emotion.  —Dave Heaton, editor, Erasing Clouds (USA)

“Annie Maley can be presumed to have one of those voices with it’s own personality. If to that you add to a base of rhythms and samples , melodious guitars and keyboards, in addition to a good dose of intention to move you to the dance floor, the result will be very close to the last release of Potion, Circa.“ —Beatriz Fernández.- Propop.net (Spain)

“Four powerful and addictive songs that liken Potion to Blondie or to the exquisite Kelly Slusher with more optimistic subjects, pop close to new wave (those keyboards) with which you will not be able to keep your feet quiet for an instant.”—Juanra Carrion-Moonpalace (Spain)

“From another time, between honeylike guitar melodies and ethereal synthetic sounds, Potion floats in a ungraspable space/time continuum, between the last Bob Dylan and a future musical adventure still to come”—Val -Actu-net (France)