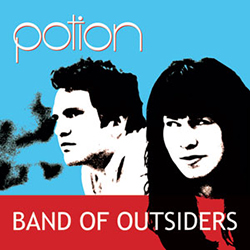 Potion has a way of evoking nostalgia for a place and time you didn’t even know you were longing for, or perhaps haven’t even lived yet, all while luring your body onto the dance floor with a melodious, sometimes up-tempo, sometimes sensual fusion of musical styles and rhythms that evoke distant
explored places and timely wicked truths.

The band’s third album has chiseled out an elusive space. One between agonizing—and redeeming−love and longing, scalding political commentary concealed just beneath the silvery veil of Annie Maley’s raw silk voice, and time-tripping space-traveling galactic adventure. Band of Outsiders explodes into immediate movement, and keeps the energy flowing effortlessly, from sonic to sensual to ferocious and back again. It’s a continuum that merges seemingly separate stories and moods into one spiraling, but ever-forward drift.

““Band of Outsiders”—Title track from a really rather fine collection of electro-guitar Pop from this San Francisco duo of Annie Maley and Michel Bedoya. Full of upbeat urgency and fired through with an almost manic eyed fever, this is the sound of watching action thrillers on the TV with the neighbours’ stereos blasting Yummy Fur and early Stereolab records loudly through the walls. Elsewhere the album merges bossa-pop and what sounds like a penchant for mid ’80s groups like Miaow. Certainly worth checking out.”—Alistair, Tangents Magazine (UK)

“Quirky pop-rock greets the ear immediately as “Band of Outsiders” begins. You can hear some Depeche Mode influence somewhat along with a nod in the direction of the more alternative rockers The B52’s. But Potion knows how to draw their own line in the sand as they continue with political commentary surrounded by catchy hooks and noodled vocal trips that not everyone will instantly like. Always up-tempo, Potion loves to rock the Casbah with all the hefty mighty guitar-centric kids set aside for a moment. Yeah, there are plenty of bleeps and electronica’s for all the electro fans but this isn’t a rehashing of what already happened during Reagan’s tenure and that’s what makes it so darn special.—J-Sin, Smother.net (USA)

“Potion make romping, bruising, sophisticated, fuck-you pop music, and in Annie Maley they have a true star just waiting to be found and made into an international queen of the free world. ‘Band of Outsiders’ never really lets up. From ‘25th Century’—an ode to Buck Rogers it seems—onwards, Potion’s sound is that of a modern pop band running wild through the history of music. They even make the banjo sound sexy. Beat that George Formby! And even where things do let up a little, the quality never dims. Take ‘Til The Morning’, which, oddly, sounds a little like The Smiths around the time of ‘The Queen Is Dead’ but with a drum machine. And I think that’s the beauty of Potion. While they are essential a synth pop band—they have enough about them to realise that a love of Bis and Depeche Mode will not an album make. All hail them, then for taking in even a bit of Latino—oh yes!—and following it up with something that wouldn’t sound out of place on an Orb album. Ecelctic is a phrase that is too often used, but there’s no better one for Potion. They might scramble your egg sometimes, but on the whole I think that’s a good thing, don’t you?—Sam Metcalf, Tastyfanzine.org.uk (UK)