A bit about Potion 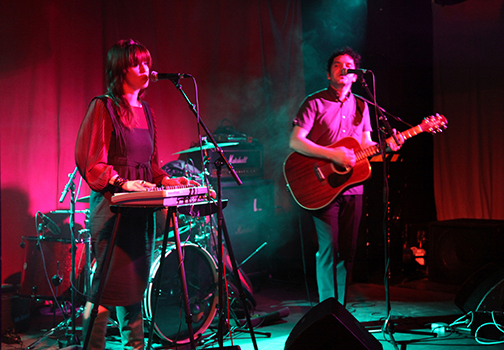 Potion is the San Francisco based duo of Annie Maley and Michel Bedoya. They make art and music from their ideas. Their music is a true synthesis of elements, blending modern sampling and synthesizer work, surf guitars, layered vocal harmonies, and ultra cool maracas!

After years of touring the globe, performing in venues across the US, Canada, South America, and Europe, Potion has been more recently focused on blending their new recordings with multimedia designs, short films, and animations.

With the release of their new single, Dark Matter, Potion is back presenting their lush, layered musical stylings in a new domain of experimental film production. As long-time independent artists, Potion has always been experimenting with new mediums and technology for artistic expression. Their upcoming album, These Four Walls will be released as a series of singles accompanied by short films exploring the topics of our times.

The first of this series is Dark Matter commemorates the 50th year anniversary of mankind’s first steps on the lunar surface. Their short film explores the possibilities of space travel as viewed through a retro-futuristic lens as the Exoplanet Travel Agency offers a new series of holiday packages for the jet-set traveller. Based on a design project called “Visions of the Future” by NASA/JPL, originally created to inspire the imaginations of new generations of innovators and explorers, Potion has written and animated a short film taking it one step beyond.